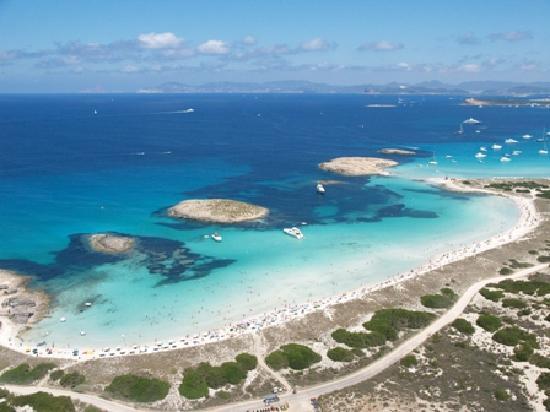 Often dubbed the little sister of Ibiza (the world-famous party queen), Formentera has somehow managed to remain off the grid for many a holiday goer. Most merry-seekers have dodged this trail during their annual flocking to the larger, more popular Ibiza, dubbing her too dull for their liking.
Then again, she’s like that kid whose beauty was not apparent in her formative years. It’s hard to believe they are one and the same now, because she’s grown to be gorgeous. A bombshell of a beauty. Slowly over the years, she’s been luring a different type of vacationer. She’s found her niche. The one.
Formentera is a dream for the laid-back type, without a bubbly nightlife as the other three Balearic Islands. She’s much quieter, making her the go-to island for anyone looking to relax in absolute seclusion, minus the crowds. She’s more beautiful in terms of natural appeal, without that over-exploited, shop-soiled feeling on most other islands on the Mediterranean.

In a word, she’s the most exclusive. Off the beaten path. A paradise for the more chilled clientele who want to lounge their days away, just lazing around. Those to who style, loud glamour and looks are not their most pressing concerns in life, but rather, a more unworldly lifestyle.
The only fly in the ointment seems to be steeper costs. Then again, quality comes at a cost, no?

Getting there and best time to visit

The 20-kilometre-long island is nestled off the south coast of Ibiza, about 3.5 kilometres away. It has no airport of its own which means visitors from around the globe have to jet into Ibiza first, make their way to the port and grab a ferry (the faster option takes just half an hour).
Peak season is in July and August, and although it’s not as peopled as the other islands, this is when most vacationers grace its shores. It’s a great time to visit, but if you’d rather have the quiet, little island to yourself, the months of May, June, mid-September through October aren’t bad either.

What to do in Formentera

There is no shortage of activities to partake in in Formentera. With incredibly clear waters laden with an amazing array of marine life, it’s naturally a beautiful place to go diving, enjoy snorkelling and fishing. The local fishermen are especially praiseful of the island’s catch, labelling it the best in terms of quality.

It’s a beautiful biking spot with well-established cycling routes, but you can also use the island’s eco-friendly electric vehicles to get you around. Or charter a boat or embark on an excursion of the nearby islands.

Fancy a dip in azure seas amongst marine life with creamy white beaches to laze on? No place is better suited. If you particularly go during the low season (think spring and autumn), chances are you will have the spectacular beaches almost to yourself, save of course for the, well, fishermen.
The island’s idyllic nature also means it’s not short of lovely picnic sites, and a perfect setting for sunset watching.

Where to go out

While Formentera doesn’t promise (nor does it try to) the vibrant nightlife of Ibiza, it does have its own after-dark charm.
Es Pujols, the only tourist resort on the island, is an excellent spot for nighttime exploits. The surround is divinely cool, with all manner of services ranging from accommodation, bars and restaurants, cafes and shopping. There are no chain stores though; it’s about crafts, chic boutiques and handiwork.

There is also Pineta, an intimate club full of cool – cool décor, cool vibe, and an even cooler clientele. The use of natural island materials has a lot to do with it, never mind the huge picture windows which ensure your gaze never ventures too far from nature. Fonda Pepe is a little bit more traditional, basic to the max, albeit full of character. The rock n’ roll joint has been a happening zone for a while now, as it is here that the likes of Bob Dylan, Bob Marley and Pink Floyd played in the ‘70s.

If you like things a little rowdy, hit the Bananas & Co, a popular waterfront hangout for Italians who make up the largest number of visitors to the tiny island in summer.

Other notable mentions that know how to get it going when the sun goes down include Tipic, Blue Bar, Beso Beach, Flipper & Chiller, and Playa Mitjorn.

Where to stay
Formentera is mostly about early nights and early mornings. Some of the hotels you might consider include:

Es Ram Eco-Resort, Near El Pilar de la Mola
The plush resort is a collection of 5 white villas with a modern décor. Snuggled amidst pines at the end of one dusty track, one of the villas features seven rooms which can be booked individually.

The other four have two bedrooms each, and have to be rented in their entirety. A car is available for guests who are encouraged to fend for themselves as they explore the hidden paradise around.
Speaking of fending…

Las Dunas Playa
Is another great option on that front.
It is more of a collection of simple bungalows strewn among the dunes of Mitjorn beach, with a cute relaxed open-air bar with a pool table to provide some distractions from the tranquility of the day – with some great soundtracks to boot.

Las Banderas, Platja Migjorn
The beach-favourite boasts 6 bedrooms and a suite. There are three villas set back from the main building which are available for separate rental.
But other than the shared surround, they have little in common with the rest of the hotel, particularly in relation to atmosphere.

Cap de Barbaria, Carretera de Capde Barbaria
Named after a road leading to the headland where it’s located, the Cap de Barbaria is a minimalist hotel with a rustic ambience. It features six rooms.
The property boasts a French-inspired restaurant and a winery that produces some good red stuff from grape varieties such as cabernet sauvignon, merlot and monastrell.

There is a whopping lot to Formentera, but now you have a picture of what to expect, and the kind of destination it is.
We wish you a pleasant sojourn!